You are going to read a list of headings and a text. Choose the most suitable heading from the list A-G for each numbered paragraph(41-45). Mark your answers on the ANSWER SHEET.(10 points)

Five ways to make conversation with anyone

In choosing a new home, Camille McClain’s kids have single demand: a backyard.

McClain’s little one aren’t the only kids who have an opinion when it comes to housing, and in many cases youngsters’ views weigh heavily on parents’ real estate decisions, according to a 2018 Harris Poll survey of more than 2,000 U.S. adults.

While more families buck an older-generation proclivity to leave kids in the dark about real estate decisions, realty agents and psychologists have mixed views about the financial, personal and long-term effects kids’ opinions may have.

The idea of involving children in a big decision is a great idea because it can help them feel a sense of control and ownership in what can be an overwhelming process, said Ryan Hooper, clinical psychologist in Chicago.

“Children may face serious difficulties in coping with significant moves, especially if it removes them from their current school or support system,”he said.

Greg Jaroszewski, a real estate brokers with Gagliardo Realty Associates, said he’s not convinced that kids should be involved in selecting a home—but their opinions should be considered in regards to proximity to friends and social activities, if possible.

Younger children should feel like they’re choosing their home—without actually getting a choice in the matter, said Adam Bailey, a real estate attorney based in New York.

Asking them questions about what they like about the backyard of a potential home will make them feel like they’re being included in the decision-making process, Bailey said.

Many of the aspects of homebuying aren’t a consideration for children, said Tracey Hampson, a real estate agent based in Santa Clarita, Calif. And placing too much emphasis on their opinions can ruin a fantastic home purchase.

“Speaking with your children before you make a real estate decision is wise, but I wouldn’t base the purchasing decision solely on their opinions.”Hampson said.

The other issue is that many children-especially older ones-may base their real estate knowledge on HGTV shows, said Aaron Norris of The Norris Group in Riverside, Calif.

“They love Chip and Joanna Gaines just as much as the rest of us,” he said. “HGTV has seriously changed how people view real estate. It’s not shelter, it’s a lifestyle. With that mindset change come some serious money consequences.”

Kids tend to get stuck in the features and the immediate benefits to them personally, Norris said.

Parents need to remind their children that their needs and desires may change over time, said Julie Gurner, a real estate analyst with FitSmallBusiness.com.

“Their opinions can change tomorrow,”Gurner said.“Harsh as it may be to say, that decision should likely not be made contingent on a child’s opinions, but rather made for them with great consideration into what home can meet their needs best-and give them an opportunity to customize it a bit and make it their own.”

This advice is more relevant now than ever before, even as more parents want to embrace the ideas of their children, despite the current housing crunch. 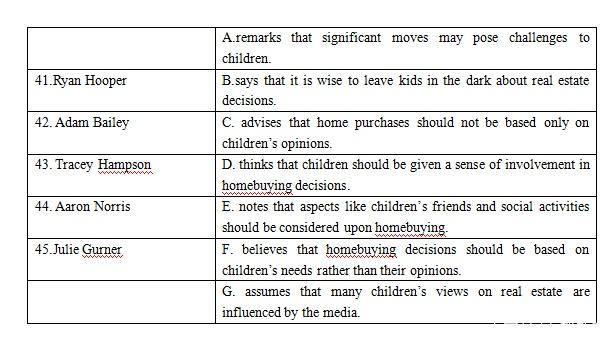 41. [A] remarks that significant moves may pose challenges to children

解析：首先我们通过Ryan Hooper可以定位到原文第四段Ryan的观点句“The idea of involving children in a big decision is a great idea because it can help them feel a sense of control..”因此很容易就选到D选线。但是通过后面的解题，我们会发现这个选线更适合做42题的答案。因此我们需要重新定位线索句，我们可以看到第五段也是他的观点，“Children may face serious difficulties in coping with significant moves,...”与选线A 可进行同义替换，因此，41题的正确答案为A。

42. [D] thinks that children should be given a sense of involvement in homebuying decision

43. [C] advises that home purchases should not be based only on children’s opinions

44. [G] assumes that many children’s views on real estate are influenced by the media

45. [F] believes that homebuying decisions should be based on children’s needs rather than their opinions.